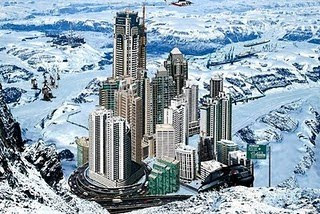 A bloc of countries above the 45th parallel is poised to dominate the
next 500 years. Welcome to the New North of James Lovelock-approved Polar Cities

the tundra, fueling fast-growing polar cities to the south like Calgary and

Moscow, the coveted destinations for millions of global immigrants.

It's a busy web for global commerce, as the world's ships advance each

summer as the seasonal sea ice retreats, or even briefly disappears.

Much of the planet's northern quarter of latitude, including the


Arctic, is poised to undergo tremendous transformation over the next


500 years. As a booming population increases the demand for the Earth's

natural resources, and as lands closer to the equator face the

prospect of rising water demand, droughts and other likely changes,

the prominence of northern countries will rise along with their

If Florida coasts become uninsurable and California enters a long-term

drought, might people consider moving to polar cities in the far north and in New Zealand and Tasmania as well?

Will
Spaniards eye Sweden? Might Russia one day, its population falling and

needful of immigrants, decide a smarter alternative to resurrecting

old Soviet plans for a 1,600-mile Siberia-Aral canal is to simply

fields and resettle Siberia, to work in the gas fields? Might Asians by the boatload make a beeline

Dr Laurence C. Smith PHD in 2010 isn't saying. But maybe he will dish later.
Posted by DANIELBLOOM at 11:55 PM