阿兜仔 - What does ADOAH really mean? Big Nose Person or "foreigner"? You decide......

阿兜仔 - MAny Westerners in Taiwan do not like to be called ''ADOAH'' in public or on TV news shows. Is there a better word in spoken Taiwanese to describe Westerners, like ''WAH GOAH''?

BOOKS: Venus Tsai [蔡慧蓉] publishes a book about her travels around Taiwan 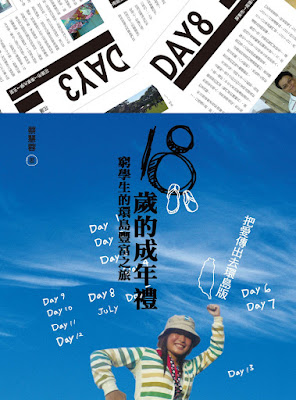 Taiwan girl used her thumb to catch rides around Taiwan and wrote a book about it!

When a 17-year-old girl from a Taipei high school embarked on a
round-the-island solo hitch-hiking trip, it landed her some national
TV publicity and an eventual book contract


Venus Tsai [蔡慧蓉] was just 17 when she decided to hitchhike around Taiwan, by
herself, with just NY$2000 stashed in her backpack, and by the time
she was finished, 13 days later, the Yunlin County native found
herself the subject of a
TVBS news story airing on national television and a fullpage,
illustrated news article in the colorful tabloid newspaper Apple
Daily. The Taipei high school freshman made it around the island,
using her thumb, her brains and her wit, catching a total of about 25
rides up and down both coasts.

Locus Books in Taipei published Tsai's
book -- titled [十八歲的成年禮] --
on June 1, according to Locus editor Linus Liao. Based on
blog entries and photographs that Tsai took during her adventure, the
book is being marketed to
young adults nationwide.

"It's a dream come true," she said in a recent interview
over fried rice and tofu in Chiayi City. "I always wanted to hitchhike
around Taiwan, and I did it, and
now this book is coming out. I am very excited and psyched, and this
is just the beginning. I plan to travel around Malaysia this
summer, and then go to Australia on a working holiday visa for a year."

When asked why she wanted to hitchhike around Taiwan by herself at the
age of 17, Tsai said she
had once seen a Taiwanese movie called "The Most Distant Course"
[最遙遠的距離] about a sound editor who recorded many
natural sounds around the island.

"That movie inspired me to go on
my own solo hitchhiking adventure around the island," she said. "I
wanted to go out and find my dream, to make my dream come true, and
also I wanted to learn more about who I am and what I can do by
myself, on my own, so I did it," she said. "I just wanted to leave the
real world
behind and embark on my own adventure. My father wasn't very happy
about what I planned to do, but he trusted me enough to let me go,
reluctantly."

Having completed her second year at Shilin High School of Commerce in
Taipei, Tsai has decided to drop out of school for a year or two. "I
plan to finish senior year of
high school later on, when I come back to Taiwan," she said. "I'm
young and full of life, and I feel that this is the time to travel, so
I am doing it my own way."

Tsai said she enjoyed high school and that
English was one of her favorite subjects. "I guess that is
one reason I want to go overseas to live and work in Australia for a
year now, I want to live in a completely English environment and
really improve my English. I'm excited about going there," she said.

When asked where she gets the travel bug from, Tsai said: "My parents
both work in the tourism sector, my father is bus driver and
my mother is a tour guide, so I guess I have the travel bug in my
genes maybe."

Tsai was "discovered" by a TVBS camera crew and an Apple Daily
reporter by complete chance, she says, and this is was set her on the
path to becoming a published author at the age of 18.

"I was on
the final leg of hitchhiking trip when I
found myself at a traffic light in Taichung and saw a car that had
stopped at the intersection. I decided to knock on the window of the
car and ask for a ride
north," she said.

"The three people turned out to be television reporters, and when I
told them what I was doing, thumbing my way around Taiwan, they said
this would make a great news story," Tsai explained.

Tsai noted that because she was a minor when she signed the
book contract with Locus Books, the publisher asked her
father to sign the book contract for her.