Larry Smith doesn't say it, but polar cities are in our future, too. 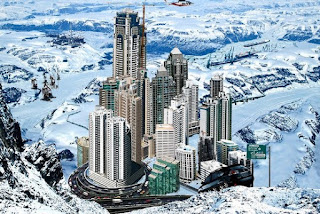 ''I imagine the high Arctic, in particular, will be rather like Nevada—a landscape nearly empty but with fast-growing towns. Its prime socioeconomic role in the 21st century will not be homestead haven but economic engine, shoveling gas, oil, minerals and fish into the gaping global maw.'' [ADDED BY DANNY BLOOM: ''AND LATER, the high Arctic will become home to over 200 polar cities scattered across the north, for survivors of climate chaos from global warming in the year 2500 AD.'']