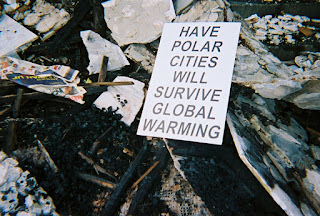 When veteran sci-fi writer Jim Laughter sat down in August 2011 to
start in on a new novel about a global warming dystopia and mankind's
shaky future, he did so with the same can't-put-this-book-down
storytelling skills and online research savvy that he had put into his
earlier 10 books. Seven months later, after typing out each chapter of
POLAR CITY RED on his computer keyboard, Laughter, 59, was finished --
and a new kind of science fiction genre was born: "cli-fi", or climate
fiction.

POLAR CITY RED is set in the near future, but not so far away,
actually. In 24 quickly-moving, well-plotted and page-turning
chapters, Laughter's "polar western" in the Last Frontier poses a very
important and current news-headline-echoing question: will mankind
survive the coming climapocalypse and dystopia that is coming our way
as the Earth heats up over the next few centuries, sea levels rise and
millions of "climate refugees" make their way north to Alaska, Canada,
Russia, Norway. Think scavenger camps, Mad Max villages, and
U.N.-administered ''polar cities'' -- cities of domes, as Laughter
calls them.

In addition to being a masterful storyteller, Laughter, a retired USAF
technical writer who has lived all over the world, comes across also
as a probing moralist, a deeply-concerned philosopher and a modern
Jeremiah-- as befits a former pastor who built two churches and finds
in religion both an anchor and a place for hope.

POLAR CITY RED is not just about climate change or northern dytopias,
but it is also about the moral questions that must guide humanity as
it tries to keep a lid on global warming's worst-case scenarios while
also looking for solutions to mankind's worst nightmare -- the
possible final extinction of the human species due to man's own folly
and extravagant ways.

POLAR CITY RED is the kind of "climate thriller" you can read in one
long sitting on a quiet afternoon or evening. Others will want to read
a few chapters at a time and get through the book in a week or so.

Writing POLAR CITY RED took Jim Laughter 7 months of non-stop research
and keyboarding, but what he wrote will last 100 years -- or more!
Because POLAR CITY RED is more than just a cli-fi thriller; it exposes
the raw underbelly of mankind's most terrifying nightmare: the
possible end of humanity and God's deep displeasure at what His people
have done to this third planet
from the sun.

The book is a prophetic, futuristic and moralistic tour de force. You
will get through this one alive, but will our descendants, 100 or 1000
years from survive the Long Emergency we are in now? That's the
probing question that Laughter poses in what is perhaps the most
important sci fi book ever written!

POLAR CITY RED ends on a note of hope and redemption, so it's not a
downer at all. You and your loved ones need to read it. As Laughter
himself says in the introduction to the novel, quoting Christopher
Morley: ''When you sell a man a book you don't sell just twelve
ounces of paper and ink and glue - you sell him a whole new life."

Laughter's novel would also make a mighty fine movie one day, too,
along the lines of "The Day After [The Day After Tomorrow]." Until
then, put POLAR CITY RED on your summer reading list.